As you know if you are reading this then you are probably reading it via the St Andrews website or off our own Melton Parish Council pages.  I don’t think many people are bothering to look online so I think a lot of the effort is a bit in vain.  It takes a lot of work to put it together and my bit is just a small part.  Let’s hope that the physical delivered version of the Melton Messenger comes back soon.

Play Park reopens
We were pleased to be able to open the play park in July. We had to remove 3 swings, closed off one piece of equipment and placed lots of signs around the park reminding users to adhere to government guidance, maintain social distancing and to wash/sanitise their hands frequently. It appears as popular as ever.

The playground had its annual safety inspection with only a few minor points being highlighted and most have been fixed.  One issue raised was damage to the zip wire seat. By all accounts this damage was caused by a dog, with the owner actively encouraging it, and was witnessed by a local resident.  Very disheartening indeed.

Despite warnings on signs and in the media, I don’t think that all users are taking heed of social distancing as perhaps they should be.  This led to other councils being afraid to open their playgrounds but in the end they seem to have capitulated and opened them up despite the risks due to public pressure.

CCTV
A while ago I reported that we were considering having an electric gate to stop vehicles getting in after dark. To that end we laid cable along with draw strings from the pavilion to the main gate.  In the end an electric gate would have been very expensive, problematic and perhaps not resolved the issues.  However with the duct & cable installed we decided to install CCTV instead.  It seems that level of anti-social behaviour has reduced but we don’t know if CCTV is the reason.  It gives very good quality images and would help us and the Police to identify any perpetrators who cause trouble in the recreation ground.

Pavilion
We had a meeting of 8 councillors and a local architect early in August to continue the process of replacing the pavilion which has come to the end of its survivable life.  We are looking for a robust building with a similar footprint to the old building.  We have come up with some basic requirements such as low maintenance, vandal resistant and with a toilet accessible from the outside which is a major request from our community.  Once we get some draft plans we shall share them with the community.

Meetings
We put together an Interim Management Committee to oversee the council’s affairs during the Covid19 lockdown.  We have had conference calls and Zoom meetings.  The last of these meetings was on August 12th. We are resuming our normal schedule of meetings in what I guess people are now calling the ‘new normal’ situation. The meetings for the foreseeable future will be via Zoom with details on how to join on our website.

Village sign
We were disappointed to see the damage done to the village sign opposite McColl’s. The roundel commemorating the 2012 Torch Relay had been vandalised. We took it down and will get it restored with the help of local company SBD who did the original design for us. Hopefully we will get it back up again soon. Sadly, there has been too much petty vandalism lately.

Why anyone would think it is appropriate to deliberately damage public property, especially something that marks what was a great day in the village is beyond me.  Mindless comes to my mind.

On the positive side, it did bring back memories of 2012. The attached photo shows the crowds of local people who came out to watch the Olympic Torch pass through Melton.  It was a great day and kicked off many village events such as the Fete which we had to cancel this year – hopefully it will be back up and running again next year. It may have to be on a smaller scale in these uncertain times but we intend to get everyone together even if it is just for a big picnic! 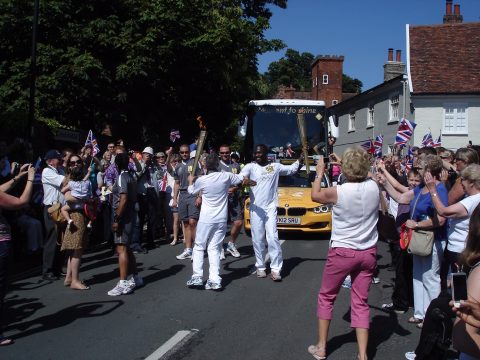 Sizewell C
The Sizewell C (SZC) planning process has progressed to the Pre-Examination stage, which will run from 8 July to 30 September 2020. This is not a consultation.  It is an opportunity for consultees and the public to read the planning application and register on the PINS website (using the Planning Inspectorate’s Registration & Relevant Representation Form) to become an “Interested Party” by providing a written summary of their views on the application.  A registered “Interested Party” will then be kept informed of progress and have the opportunity to put their case forward at the next stage: the all-important Examination stage.

The Parish Council will be submitting a summary of its views on the planning application and registering as an “Interested Party”.

Neighbourhood Plan
Our Neighbourhood Plan (NP) is over 2 years old and in order for it to be 100% effective it needs to be updated.  We are working on this but we have been a bit thwarted by the application to build on just half of the Carter & Warburg site and also the fact that the District Plan is still not formally issued.  We are trying to plough on despite these issues.

SID Stalks
Who is Sid Stalks I hear you cry, well for those of us in MPC he is a very familiar ongoing issue. SID stands for Speed Indictor Device and ages ago I said we were going to purchase a Speed Indicator and move it to different locations around Melton, rather than having it stuck in one place.  6 sites were identified and Suffolk County Council were charged with the job of fitting stalks at the 6 locations so we can mount our Speed Indictor Device.  Well at last, all 6 have now been fitted so we are ordering the device now.  Besides showing the speed and a happy/grumpy face, the device collects traffic date in terms of speeds and volumes so we will have data to back up any issues we raise with SCC highways.

Football pitch markings
Our green space contractor used satellite technology to mark out the white lines of the football pitches and they have done a great job.  It looks very good and the football club will just have to refresh the markings now and again.