Preparing to welcome the return of swifts in May 2022

A window into the hidden world of the swift nest box 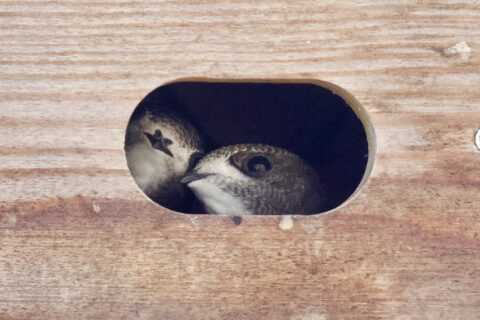 Woodbridge Swifts has been recording swift nest sites and installing nest boxes in Woodbridge since 2016. We have installed around 150 nest boxes and recorded 43 nests in roofs. We now also have swifts nesting in 25 boxes that we and others have installed.

A number of these boxes have cameras. This has given many of us an extraordinary insight into the nesting behaviour of the adult swifts and their young.

We have nest boxes for sale at £25.00 each. They have white reflective roofs and so are suitable for any aspect. To buy a box or for more information. Contact Jenny James: woodbridge.swifts@gmail.com

How do you know what is going on inside your swift nest box?

Swifts leave and enter so quickly that you may not know they are there. The first hint that swifts may nest in your box comes in June or July when you may see groups of 3 or 4 swifts screaming around the roof and gutters of your house and banging against the nest box You may observe them entering your boxes, different boxes, sometimes one, sometimes two birds at a time.

But it is impossible to know what is happening inside the box unless you have a camera.

You may see nothing until early May the following year, when, if you have by now installed your camera and you see swifts approaching, you can check on your mobile phone. With a wifi system you can get a constant stream of pictures, using an infra-red camera, from inside the box.

At first, you will see one bird and then the second bird arrives. They take time to bond with each other, preening and sleeping and only leaving the nest box to feed.

They will have been on the wing, except for a brief exploration of your box the previous summer, since fledging from their own nest as youngsters 3 or 4 years before. During that time they will have flown back to Britain at least once from their wintering grounds in Central and Southern Africa. So they are taking a well earned rest.

First, you can watch as they build the nest, a very simple collection of aerial detritus, fluff, feathers and spiders’ webs. Then, if you are lucky, you will see first one and then probably two eggs appear, 2 or 3 days apart. One of the birds will stay on the eggs ,incubating them and they take turns to leave the nest to feed.

The incubation time is around 21 days and from your camera you will see exactly when the chicks emerge and start begging for food. The quiet life is over for the parents, the numbers of visits to the nest increases rapidly as the hungry chicks grow larger. Until the chicks have feathers and can retain warmth, one parent stays on the nest, covering the chicks for protection. Again the parents take turns.

As the chick is increasingly left on its own it will be easier for you to follow its development. You will see its feathers with their pale margins, the mottled grey and white markings on its forehead and the white throat. They will be becoming truly beautiful birds. You can observe their movements, hesitant at first, away from the nest, then later on,  their vigorous exercise – ‘practice flying’ and ‘press-ups’ to strengthen the flight muscles. Occasionally you may see grey and white heads peering out of the box’s entrance hole and equally quickly disappear.

You may observe some difficult moments, as when the adults or the young left alone have to expel intruders, either other swifts or other species such as starlings looking for nest sites.  When it is very hot the young can be seen to flatten themselves against the back of the box, next to the wall of the house which would be cooler. They also open their beaks as though panting, perhaps another cooling technique. If it is very wet the adults may stay in the nest all day. Then you can observe that the chicks go into a quiescent state, lowering their metabolism. This is a survival strategy of immense value.

As the average time for a swift to fledge is around 43 days, by the end of July or the start of August you can be on the look-out for signs that the young swifts might leave. You will see their activity level increase and their feathers will be in prime condition. If you are lucky and watching your screen in the early morning, you may see your young for the last time. They may leave in quick succession or with a longer gap. They appear at the entrance hole, hesitate a couple of times and then launch themselves, down in a wide arc, learning to flap and gaining the lift to fly up and away,  never to return.

You may see parents arriving with food expecting the young still to be there. They may stay a couple of days and then, one at a time, they too will depart. You can be confident that if they survive the migratory journeys to Africa and back that you will see them again next summer. 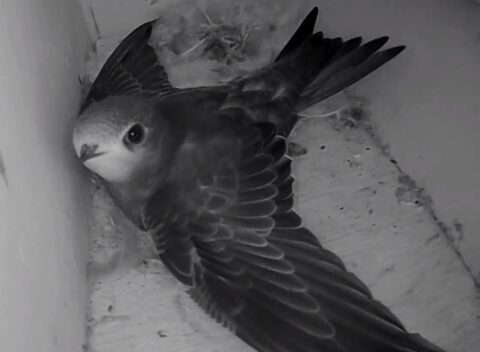