Tennis Court Vandalism
At the end of May we suffered a spate of vandalism on the tennis courts; the wire was cut in several places allowing people to gain access without a key. Maybe this was to play for free or to retrieve balls sent over from the other court. This has been a problem over the years but never at the current level. We have to buy rolls of wire netting and patch up the holes as best as we can. 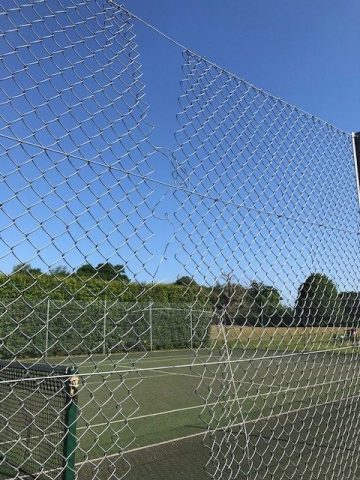 In the future we are going to erect CCTV and therefore we may get some footage of any acts of vandalism. It is a shame we have to invest money in this way but we have to ensure the safety & integrity of the assets in the park. There has also been some anti-social behaviour in the evenings and reports of drug dealing which hopefully CCTV will deter.

Recreation Ground Gate
In recent weeks, we have been locking the recreation grounds car park gates at 8pm because we were having problems with people BBQing and having large social gatherings in the park and car park causing problems for local residents. We don’t want to be party poopers, but given the continuing need to social distance and the increased risk of fire because of the very dry grass at the moment, we felt it necessary. The side gates to the park remain open for walkers.

Woodbridge Swifts
To help with the decline in the population of swifts, Woodbridge Swifts are recording swift nests in Woodbridge, Melton and Bromeswell. If you have a swift nesting in a box or in your roof, they would like you to contact them at woodbridge.swifts@gmail.com. They also have nest boxes and CDs of swift callings for sale for those who might like to encourage the swifts to nest near you.

Planning Applications
At the moment we are confronted with three extensive planning applications which if they went ahead would have a very significant impact on Melton.

1. DC/20/1521/FUL
PROPOSAL: Care Village comprising an 80 bedroom care home together with 75 assisted care bungalows, cafe/club house, Bowling Green, car parking, open space provision with associated infrastructure and access. This is just off Yarmouth Road Melton IP12 1QH. MPC’s contention is that the access available for pedestrians etc. between the proposed site of the Care Village and amenities/transport links in Melton are inadequate, and made even more so by requirements for social distancing. We are opposing this application. SCC Highways are also in opposition.

2. DC/20/1831/OUT
Outline Application with Some Matters Reserved – Residential development of up to 55 dwellings, with access off St Andrew’s Place. This is the part of the land that forms a central part of our Neighbourhood Plan but does not cover the land owned by the Carter family. Not having direct access to Wilford Bridge Road would be a major problem. St Andrew’s Place is already highly congested and unsuitable for access. We at MPC are opposing the application with its proposed access via St Andrew’s.

3. DC/20/1636/OUT
Outline Application for up to 27 Self Build and Custom dwellings. Land West of Prow 21 Woods Lane Melton. This would just add more traffic pressure to an already very busy Woods Lane. There is already a lack of doctors, dentists and school places etc. We are opposing this application.

We just seem to becoming a bit of a target at the moment but rest assured that MPC are trying to represent the interests of current as well as future residents.

Melton Primary School during the lockdown
During the Covid-19 pandemic, Melton Primary School has remained open for vulnerable children and those whose parents are key workers. The Senior Leadership Team (SLT) put in a huge amount of planning to allow Reception and Years 1 and 6 to return as safely as possible in early June. This involved ensuring that the children could spend their time in bubbles of less than ten children, each with their own equipment. Each bubble has its own class room and outside space. You may have noticed that the playing field has been divided up with green fencing. At the moment, there are 6 bubbles; one each for Reception and Year 1 and two each for Year 6 and the vulnerable and key workers’ children. Currently, there are about forty children attending the school and all of the staff are working except those that are shielding. Days are very regulated with start times staggered and the three entrances carefully allocated and there are routines for hand-washing throughout the day. Plans are in place for frequent cleaning and there are procedures if anyone becomes sick. Other year groups and those children who have not returned to school continue to receive home learning guidance. The SLT and governors now have to put their minds to what might happen in September. In the meantime, we all hope that the children and staff stay safe and well and send everyone at the school our best wishes and thanks for their hard work for our community.

Full list of 148 priority cycle schemes unveiled for Suffolk
An article in the EADT stated that nearly 150 routes across Suffolk have been eyed as priorities for cycle improvements over the next five years, costing well in excess of £80 million. It came from work undertaken by a cross-party task force at Suffolk County Council on improving cycling routes, with a full list of 148 priority routes for the next five years. There is only one that would affect us in Melton and that is rather annoyingly under a Woodbridge heading. This is the route along the River Deben Path from Melton Station to Kyson point.

The riverside route has already caused a bit of friction between walkers & cyclists and a few altercations have been reported recently. Cyclists and walkers should get on with each other, after all they are often the same people. During the lockdown I have seen both joggers and cyclists who think they have the right of way and would stop for nothing, they seem to think they are exempt from social distancing.

I do worry about the research into these sort of ideas, why end it at Kyson point? Surely extending it so it emerges into the Martlesham end of Sandy Lane would be the thing to do. That way we would have a route that avoids the Sandy Lane hill which is quite a steep ride after a day at work and I speak from experience. We will see what happens if the past is an indicator then probably nothing will happen for a long time.
The full article is at https://www.eadt.co.uk/news/suffolk-five-year-cycling-plan-unveiled-1-6692734

Pardon the weeds
Suffolk Norse are responsible for maintaining the grassy areas owned by East Suffolk Council. Since lockdown, they have only cut areas that presented a health and safety issue, making sure that road junctions were cut to ensure visibility and access to residents’ properties. Now that restrictions have started to ease and with some significant growth of grass, they have taken the opportunity to manage some areas of open space differently with a focus on biodiversity. This is particularly the case in those areas where longer grass is beneficial to wildlife; they have seen some areas that have become havens for invertebrates and pollinators, and would like to preserve these where possible.

They have identified 41 ‘conservation areas’, where they will aim to manage the land differently, and not cut until the end of the season. These include the verges in the area from the A12 down Woods Lane/Bredfield Road and at Bury Hill. These areas have been chosen on the basis that this change is likely to be uncontroversial for local residents, that it presents no safety issues, and that the space is at a scale that will provide an environmental benefit to wildlife.

The trial of managing grass more sustainably in certain churchyards has also been well received and they will move to do this permanently.

They are asking if we, the community, could monitor these areas, removing litter and making sure invasive plant species do not dominate the grasslands.

Some of the land that is being transferred from East Suffolk Council to Melton Parish Council could be treated in the same way.

They are providing the logo below which will help identify the areas and let people know why the grass is being allowed to grow, so look out for it. 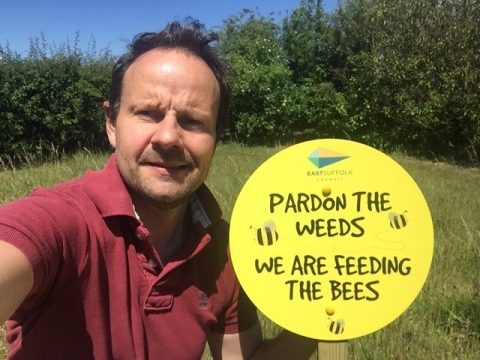 MPC Councillor Vacancy
Following the resignation of one of our councillors we now have a vacancy for a councillor at MPC. Please consider joining us and let us know by emailing myself or the clerk – clerk@melton-suffolk-pc.gov.uk. We are now able to co-opt a volunteer as from 16th June.

St Audrys Social Club
The club has now been declared an asset of community value. Good news, let’s hope for a good outcome.

So I shall sign off with the words as predicted in the video clip of Michael McIntyre sees a fortune teller in June 2019. A fellow councillor said “The video cheered me up no end!” It could cheer you up too.