Road stud replacement on Woods Lane will be taking place from the 30th September to 11th October. Two way signals will be in place from 7pm to 5am.

The footpath running along the river from near the Deben sailing club towards Kyson point will be closed to allow for emergency footway repairs to be carried out. Map showing closed footpath

Alternative route: There is none available.

Enquiries regarding this closure should be made to the following:

From the 6th April the 71 bus will depart from Orford at 07:00, 10 minutes earlier than the current timetable, in order to reach the final destination on time. The full timetable can be seen on the traveline website. The stopping times in Melton and final arrival time in Martlesham are not changing:

Old Church Road/Lower Road in Ufford will be closed from the 2nd to 6th March due to works being carried out by Anglian Water. 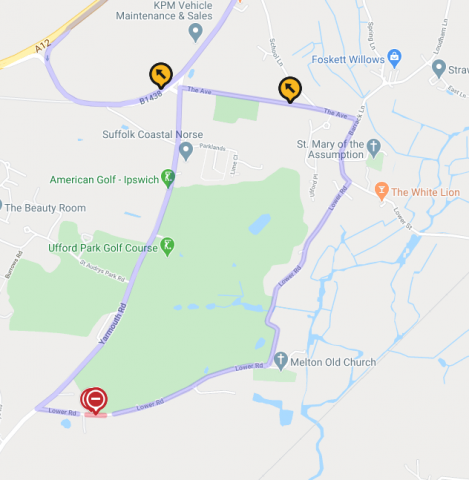 The Street – road closure and impact on buses

Update 24th February 2020 – The Street will remain closed until the 28th February due to a delay in receiving the Loss Adjuster’s report. It is hoped that once this is received the closure will be removed and replaced with temporary traffic lights until the chimney is repaired.

The Street is closed from Saddlemaker’s Lane to Station Road due to a risk of falling debris from a damaged chimney on a property on The Street. It is expected to remain closed until the 14th February.

We are holding two Open Consultation Events at our office for Melton residents to give their views on updates to our Neighbourhood Plan (NP), which is now 2 years old.  There will be more information on the NP website www.meltonneighbourhoodplan.co.uk  but please do come along to give your feedback.  We will also be giving further opportunities for residents to give their views online and at future open events.

These sessions will also be seeking residents’ views on how we intend to spend our Community Infrastructure Levy (CIL) income.  We have a number of large projects in mind and we need to ensure they meet local needs and aspirations.  Many of these emerged from the NP.

If you cannot make the open events you can complete the online survey.

Many of you will have heard that significant changes to First Eastern Counties’ services in the Ipswich area taking effect from Sunday 1st September. This is an extract from the ‘news item’ which appeared on their website in early August. First has also brought in a new local identity for their Ipswich depot. You may have noticed some buses in the new “Ipswich Reds” livery.

From 1st September we’re making changes to some of the times and routes of our buses around Ipswich. These changes are based on feedback from passengers, local stakeholders and our local driving team as well as extensive analysis of passenger journeys and punctuality of our services.

Our new ticket machines, introduced in May 2018, allow us to collect more detailed data on where and when people travel than has ever been possible in the past and we have carried out a detailed analysis of all of this information when designing these changes; many of which are intended to bring simpler, quicker and more direct journeys for the majority of passengers as well as ensuring the long-term sustainability of our network that is operated almost entirely without any sort of local authority subsidy.

Printed copies will be available from our Ipswich Travel Shop in Old Cattle Market Bus Station and all of our usual outlets around two to three weeks before the new services begin.

Despite the impression given by the news item, there has no discussion of consultation with East Suffolk Council or the many town & parish councils along the routes, nor with the local branch of the Campaign for Better Transport. By law, Suffolk County Council should have been given the full details on or before 5th July, but they too have neither informed nor consulted local councils.

View the new timetables and changes

The local services affected are:

An additional Mondays – Fridays journey from Framlingham to Ipswich, returning at 14:05. The current schooldays only journeys to/from Thomas Mills High School will remain.

This will remain hourly, but after the Turban Centre they will run via Warren Hill Road & Old Barack Road direct to the Duke of York, omitting Drybridge Hill, Bullards Lane, Peterhouse Crescent & Naunton Road. After that, they will go straight down the A12, bypassing the Red Lion and Black Tiles; none will call at TESCO (but see 65 below). Early morning (e.g. 06:45 from Melton) and ‘late’ evening peak buses (e.g. 18:20 & 18:50 from Ipswich) will cease.

The replacement for service 800 (see below) is four journeys Rendlesham – Woodbridge – Ipswich Mondays to Fridays (but only two from Ipswich) with just two each way on Saturdays. There will be an additional two starting from and finishing at Melton on Mondays to Fridays.

The good news for Melton is that all 65s will run via Station Road, Woods Lane, Bredfield Road & Pytches Road, but this will mean no buses along Melton Road.

The bad news for Woodbridge is that, like the 64, all journeys will omit Drybridge Hill, Bullards Lane, Peterhouse Crescent & Naunton Road. From the Duke of York they will follow the existing route via TESCO.

Will remain every 15 minutes, but the hourly extension to Woodbridge & Rendlesham will be withdrawn. See service 65 above.

Outside our immediate locality;

The former Superoute 66 will omit Eagle Way, thus cutting off the many inhabitants of Martlesham Heath. 12% of the 1,440 households there have no car; it has a population of about 3,000 of which about 18% are aged 70 and older.

This recently introduced service, First’s response to repeated requests for buses to serve the specially built bus terminal within Ipswich Hospital grounds, will cease. So whilst all Ipswich Buses (the ‘green buses’) passing the hospital will serve the Garret Anderson Centre, none of First’s will.

Now that I’ve managed to build up a complete picture of the changes, I will finish updating the ‘new look’ Local Transport Guide, which was on the verge of publication when this news broke.

If you wish to complain about these cuts, please email steve.wickers@firstgroup.com or write to:-

Please try to copy to your county and district councillors and Parish Clerk: